An Unexpected Gem at The Taphouse Ghent

From time to time, less and less frequently the older I become, I will catch a band that resonates so strong with me that I am compelled to tell everyone I know about them.  This blog has been stagnant for well over a year, but witnessing the set of Troll 2 on Saturday night not only prompted me to buy both of their CDs, but to revive this blog so that everyone in my own little online world can know about them.  In fact, their set actually made me feel guilty, ... ashamed that I did not contact my brother and his wife to invite them to this show, because knowing their musical tastes I am certain they would have also been equally moved.

Lame excuse for the above:  I almost did not go to this show and only decided to go at the last minute, so it would have been a scramble to invite others.  It is always a pleasure to catch a set by my friends Broken Mouth Annie (see a complete blog writeup here), but the true driving force that brought me to this show was the name of this Boston band touring the East coast.  For the uninitiated, Troll 2 is a horrible worst-of-the-worst low budget 80's movie that is perhaps the most brilliantly entertaining piece of cinema one will ever witness.  I've seen it about 15 times.  In my logic, it was pretty much mandatory that I check this band out based solely on their name. 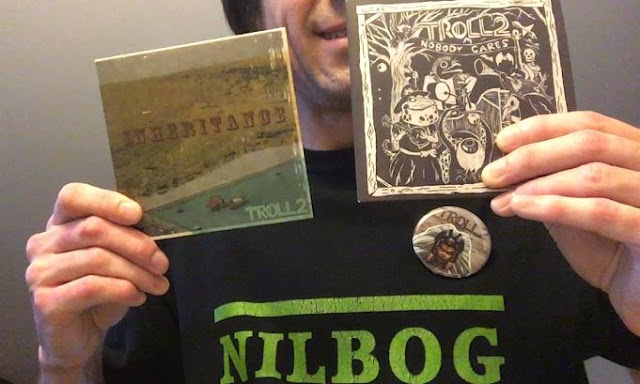 Just as the movie Troll 2 has no correlation or connection to its predecessor Troll, it seems that the band Troll 2 has nothing to do with the film which is perfectly OK.  Enough introduction, what IS this band?  Well, they have no drummer.  They have an upright bass, mandolin, acoustic guitar and fiddle, and 4 very capable players who are all extremely talented vocalists too.  Add to that an intense high energy, clever soulful songwriting, and a high percentage of punk rock spirit and you there you have the jaw dropping quartet.  They shout and wail in harmony songs about a range of subjects including partying like you are in high school, not being too old to play in a band, corporate downfall, taking drugs (prescribed and unprescribed) and the general angst of not feeling comfortable on this planet.  They are funny, thought provoking, danceable, and they are capable of busking their music which they did on the streets of Norfolk all afternoon before their show at the Taphouse.  I am no videographer, and I have shaky hands, and my iPhone's sound quality is not great ... but I took this video of "As Hard As A Man" which captures the amazing standout soulful charm of fiddler and vocalist Zoe Rose de Paz.  She got some lungs!

And here is one of their more high energy ditties.  They closed their set and opened their new album with this one:

I spoke with the band after the show and they were enthralled with Norfolk and gave praise that it was by far their best (as well as last) show of their tour.  They seem willing to come back over a great distance to be here again, and I will personally do whatever I can to make that happen and make sure all my friends come with me next time.

I'd be amiss to not mention the opening band, Whaley Mammoth, a trio from Whaleyville VA.  I'd never seen or heard of these guys and I walked in when their set was almost over.  What I caught was an excellent playlist of punk rock covers ranging from The Clash to Against Me.  The audience was going crazy and singing along with their selections, and I'd like to see them listed on more shows in the area.  They pulled off this stuff with apparent ease and sounded really great.  Apologies to the Mammoth for not catching video ... gotcha next time!

Check out the Music:

Posted by Uglyography at 2:18 PM