When handed a copy of Animal Fires by Human Services, I was instructed to have an hour of time to devote to kicking back and doing what used to happen in high school all the time.  That is, listening to new music while doing nothing else.  It doesn't happen enough any more for me so I eagerly agreed ... and therefore had to wait a couple of weeks.

So as luck would have it 4:30 AM rolled around one (let's say Tuesday) morning and I woke, for some reason, wired.  I was up and about and definitely had an hour, so I popped the CD into the surround stereo at the loudest volume I could get away with without my wife being disturbed over her white noise sleep machine.   And I'm a lucky man because it was actually pretty loud. 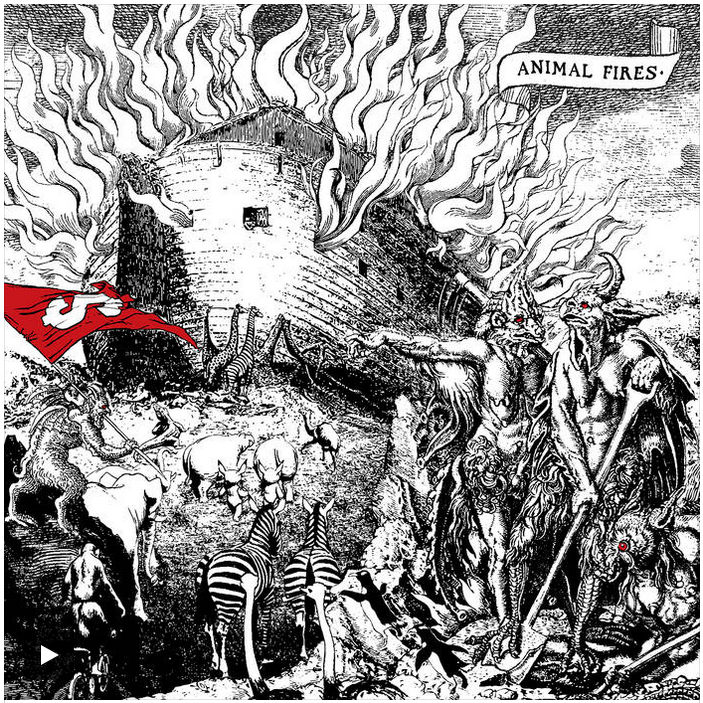 The signature tribal, pounding and slowly building beat by drummer Jeff Liscombe properly introduced the album strongly and powerfully with The Herd and Musth.  A drudging march slowly built itself into something massive by adding additional beats by percussionist Steve Kerchner, then droning noise, then killer fuzz crackle bass, then HUGE guitars, and then more trippy but very dark effects. Finally Human Services brought out it's complete signature roar with multiple growling vocalists that unleashed the full blazing power of the band.  By the time the first track slowed to a close I wasn't concerned that I couldn't make out the lyrics amidst the chaos ... I was just happy that I'd found something so "in my face" to enjoy for an early morning treat!

Then, to my surprise, the dying mayhem merged seamlessly into the quick and quieter second track, Workhorse, which sounded much like a squeaky clockwork machine that mysteriously compounds into an epic giant monster of a mechanical being.

This combo brought the album to a very fine start before heading directly into Down to Your Last Goat, more of a southern melodic sludge anthem.  When the song inevitably gets out of control and multiple vocalists trade off on their moans and roars, the song turns into a complete mess of the best.

It has been a few months since that first listen and I've had about 5 or 6 spins of the disc since then.  I'm now realizing that these first three songs really are a great representation of what Human Services does live, which is never quite the same.  Last time I saw them they had audience join in banging on a huge empty metal barrel on a stand which makes an almost ear piercing clang, yet still pales in comparison to the sheer volume that this five piece projects at its shows.  I'll be blunt, their shows are not for everyone.  Your ears will ring, and this may be true even if you wear earplugs.  Many would dismiss it as "a bunch of noise" and Human Services would likely be honored at this remark as they pride themselves as a noise band.  But if you can get past the volume and chaos you will realize that there is a unique art behind the madness.  The textures of different noise combinations created at live shows will never be re-performed in exactly the same way even if they tried.  It is all extremely "in the moment."

And as for the CD, even though it obviously contains the same programmed audio that you hear each time you spin it, there are plenty of new sounds to discover on each listen.  The fourth track, Predation, features more weird auxiliary noise which to me again sounds like some sort of machine but this time the machine is running out of steam under the threat of an approaching thunder storm.  Track 5, The River Pig is more of an industrial style track with another huge beat and lots of very fine noise providing backdrop to the vocal chant: "Bottoms Up!  Let the Frenzy Begin!"  You should check out the video for this song.  (Disclaimer:  I'm in it for maybe 2 - 3 seconds).  It was extremely well produced by videographer and Human Services' own bassist Billy Kuriko.

Let me back up now and clarify.  When I say noise, what I really mean is multiple effects pedals, with or without guitars, and often times fueled by found objects that just sound cool.  Oh, and those effects boxes, YESSSS! I have seen live what I believe to be a pedal board that took up a three level rack cart and the surrounding floor space.  Of course they were not all effects pedals, but they included mixers, unlabeled boxes that were likely homemade, tape decks, a spaghetti of cables, and countless other mysterious doo-dads that only the band understands (or at least they pretend to understand and just enjoy the screech that is created). Guitarist Donald Hart was constantly tweaking this tower of devices live to get the noisy unpredictable sound he craves at the same time he was holding down his guitar performance: a master of his own creation. 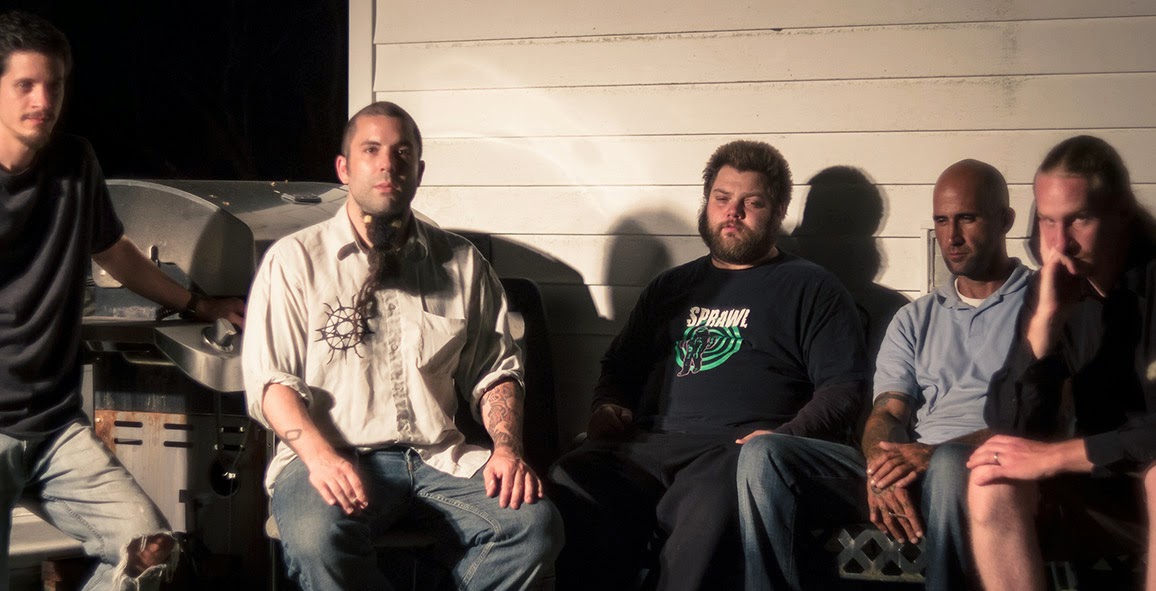 Animal Fires continues with a little more of that clockwork beat combined with creepy horror movie string-sounds and sinister voice-overs concerning fashion on Bottomfeeding.  And so the cycle continues between solid solemn heavy songs that sound great at any hour, especially 5 am,  and the shorter auxiliary percussion fueled jams that sound like Human Services alone.  It is not a formula and doesn't get boring - but you will just have to listen to the full album to see how they deviate from themselves.

I cannot help but to single out the track The Electro-Ape in which the group has managed to re-create the sound of pure electricity being unleashed in it's raw and dangerous state.  It is such a quick listen and it is scary to me for some reason, even when the groove is flourishing.  Gosh I hope they aren't insinuating the electrocution of an ape.  That would be terrible.  Or maybe they are insinuating just that, and have done their job expertly. All hope is not lost ... I think I hear an ape going completely nuts just as the song abruptly cuts itself short.

The album ends its hour appropriately with a beautifully experimental 17 minute track, No Structures in the Eyes of the Jungle.  The track was recorded and mixed at Adept Audio by guitarist/vocalist Sean Sanford, as was the rest of the album, except that this one was recorded live in a single take.  It is very impressive for an improv session and again highlights what you might hear at a Human Services show. but also sums up the album and its concept perfectly.  I can't help but imagine how this and other songs on the album relate to accounts of Noah's Ark, seeing how Animal Fires' cover art contains a rendering of the ark engulfed in flames while pairs of animals and demons stand watching.  Sounds about right.

You can pick up Animal Fires as well as other releases at any Human Services show.  Their next date is January 31 at Meridian Coffeehouse at William and Mary (206 S. Boundary Street).  Don't worry if you hate coffee shops, this coffeehouse is just a run down student-run punk house that happens to sell 50 cent cups of not-so-great coffee for an excuse to have a space to host loud rock shows.  At least that's my theory.  It's a small room and maybe after Human Services fits that pedal board inside there will be space for a few onlookers.

Posted by Uglyography at 6:37 PM